We’ve explored some haunted hospitals in Saskatchewan, but those large buildings aren’t the only haunted places to be found.  Traditionally, hotels also have some spooky tales.  It makes sense that a few of them would be in the province.

The Radisson Plaza is a Victorian hotel with old world charm & tradition in the capital of Saskatchewan, Regina. It was built in 1927 with extensive renovations completed in 1992.  This hotel, however, does not come without a darker side to it.

There have been many suicides discovered in the hotel.  No one can explain what exactly causes these suicides to have taken place.

On many different occasions, both hotel workers and guests have sighted apparitions on the premises. Many described the encounters as seeing an apparition and then experiencing a sudden vanishing. While completing their duties, employees have witnessed the unexplainable movement of chandeliers that start to swing to and fro. While cleaning up the Royal Suite, maids have encountered odd occurrences during their rounds. For example, cupboards that appeared closed at first would start to erratically open on their own. Once, a vase flew from its position for no reason at all and crashed into pieces.  It was reported that one night in the Royal suite, as the maid was cleaning the room, the cupboard doors suddenly swung open and a glass vase flew out narrowly missing her.

A lot of the paranormal activity is blamed because of the high number of suicides that have taken place in the hotel.  If there were certain places within the hotel that seem more haunted than others, it would have to be on the 5th and 8th floors. Some employees simply will not set foot on these floors because of what they fear they may encounter.

Travel a couple hours north to Saskatoon, and you will find a second hotel that has a very Victorian charm and also is believed to be haunted. 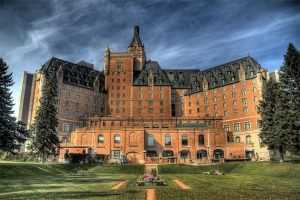 The Delta Bessborough in Saskatoon is the premier hotel in what is sometimes called the Paris of the Prairies.  This four star hotel was built in 1928, with construction completed in 1932.  Originally constructed and owned by Canadian National Railway, the Bez as it is known, was constructed in the same manner as many of the other railway hotels.

This ten story hotel is no stranger to hauntings.

There is a ghost who is known by the employees to roam about the premises. The ghost has been described as an older man, who usually appears in a gray suit with a fedora upon his head. Employees tend to see this figure walking about the hotel in the banquet level. His ghost tends to walk about the late part of the evening. If you should happen to cross paths with this resident ghost is not considered a threat. He usually smiles at those he encounters and goes about his business, not bothering anyone or causing any harm. Some have said that he is so lifelike that you may not even know it is his ghost that you have met up with. If you happen to share your encounter with the staff, they will most likely share the tale of the ghost with you; it is a popular story for those who have been working at the hotel for a long time.

Although it cannot be confirmed as to the name of the individual there is also a large crack in one of the solid marble floors at the Bessborough Hotel. The employees of the Bessborough have all heard the legend of the employee who was sent to one of the rooms one night to quiet a group of people that were having a party and causing a disturbance. When the employee got to the room and tried to get the group to quiet down, he was overpowered by 2 men and lifted over the railing and dropped somewhere between 7 and 9 stories to his death. Some say this is where the crack in the solid marble floor came from.

For some more scary things with a humourous twist, check out our new friends over at Superficial Gallery